And I’m down to my last Arashiyama post! Most of the pictures here were taken on my way from Seiryo-ji back to the famous Togetsukyo, which I saved for last because I didn’t want to brave the Tenryu-ji-like crowds anymore. I didn’t think it would get dark so soon, so sadly, I wasn’t able to get a good photo of the mountains behind the bridge. Someone please remind me to learn how to bike, because I could really use a little bit of skill to save time when traveling around Japan! 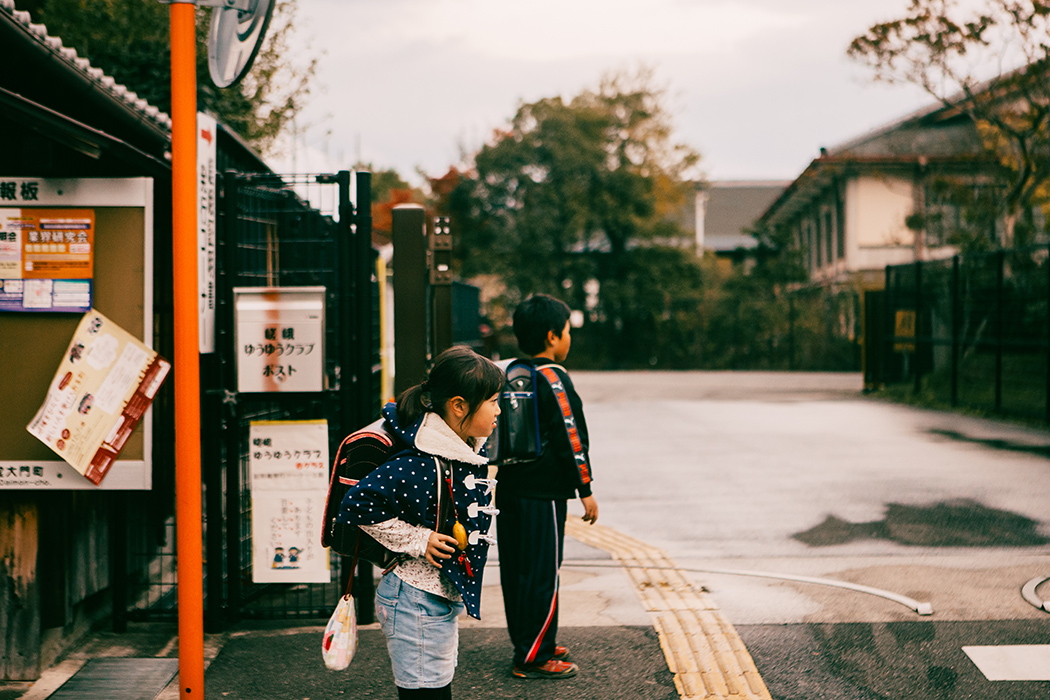 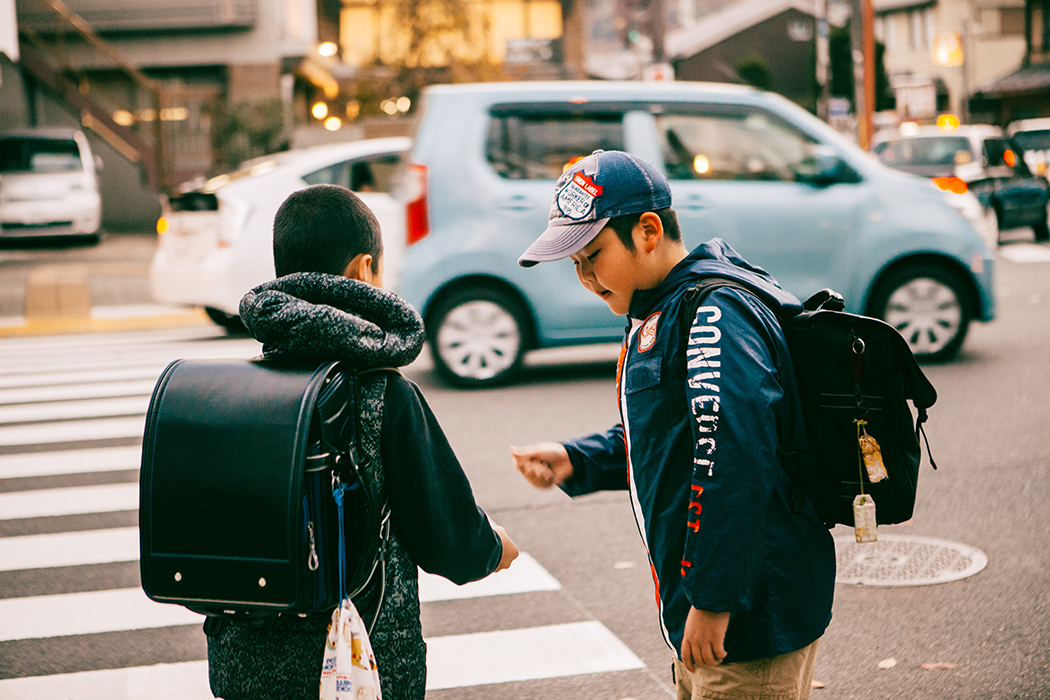 最初はぐうじゃん拳ぽん！These two got so bored while waiting for the pedestrian signal to go green. 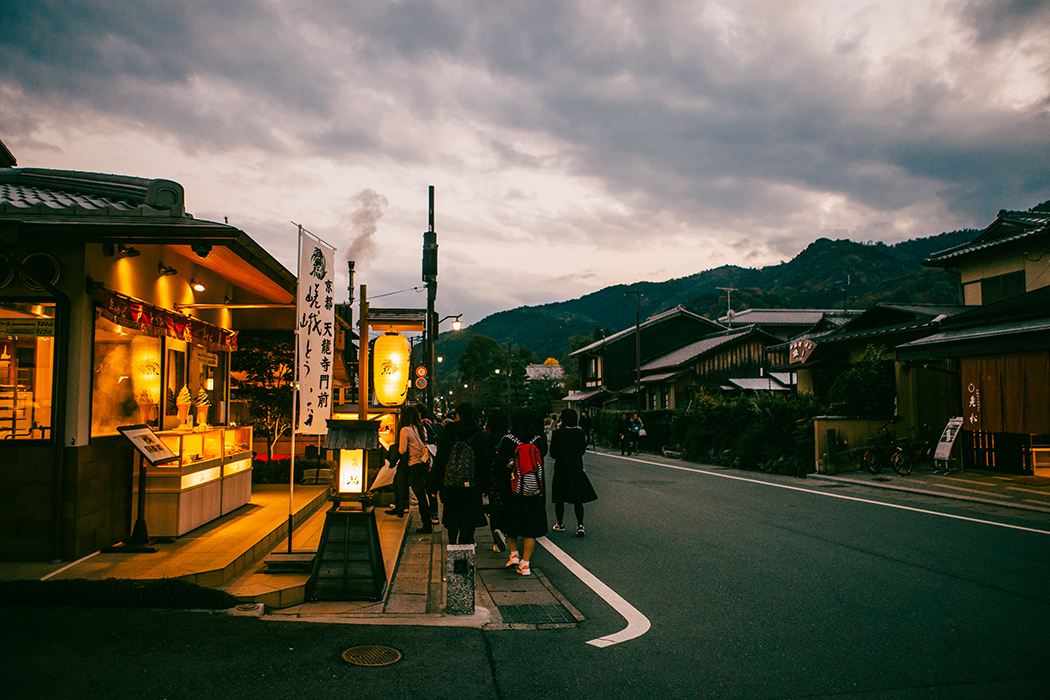 More students on their way home from school. I love the laid-back vibe in Arashiyama. Wouldn’t mind living here, especially after knowing that it’s only a few minutes away from Kyoto. Going from Quezon City to Makati takes so much longer, lol. 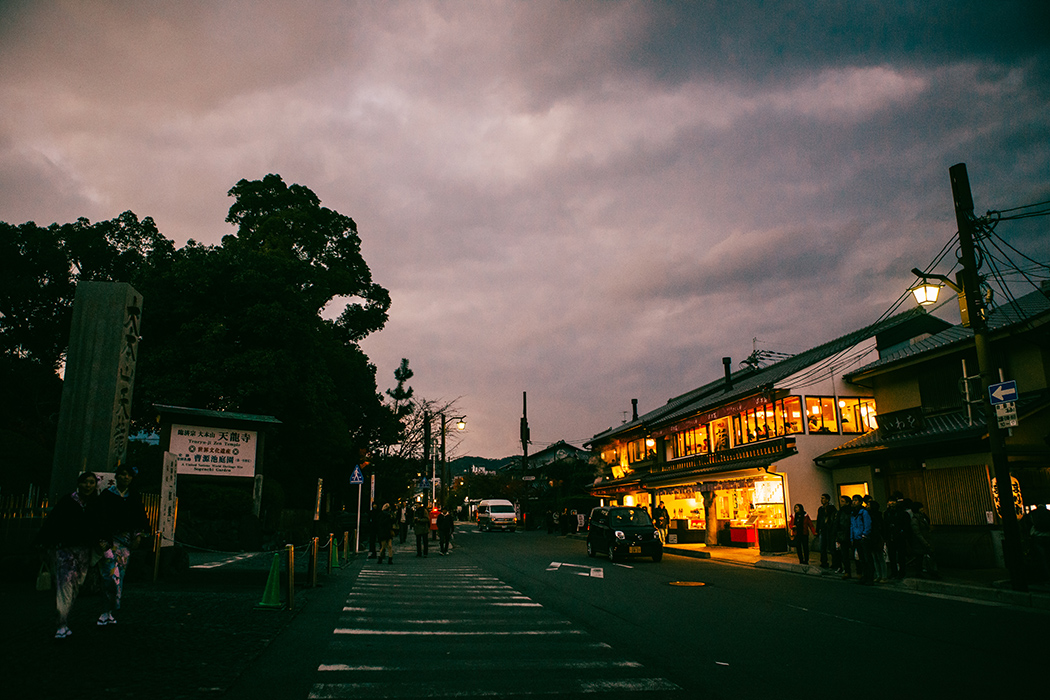 On the left is the entrance to Tenryu-ji. It’s hard to imagine how this place instantly lights up with vibrant autumn leaves once the sun is out! 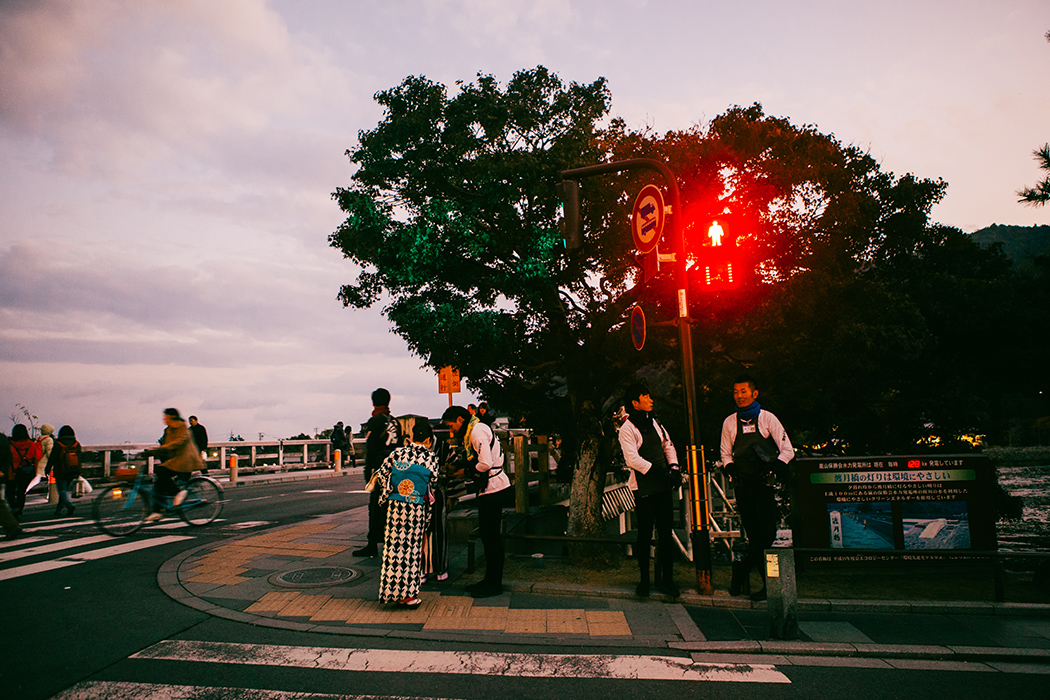 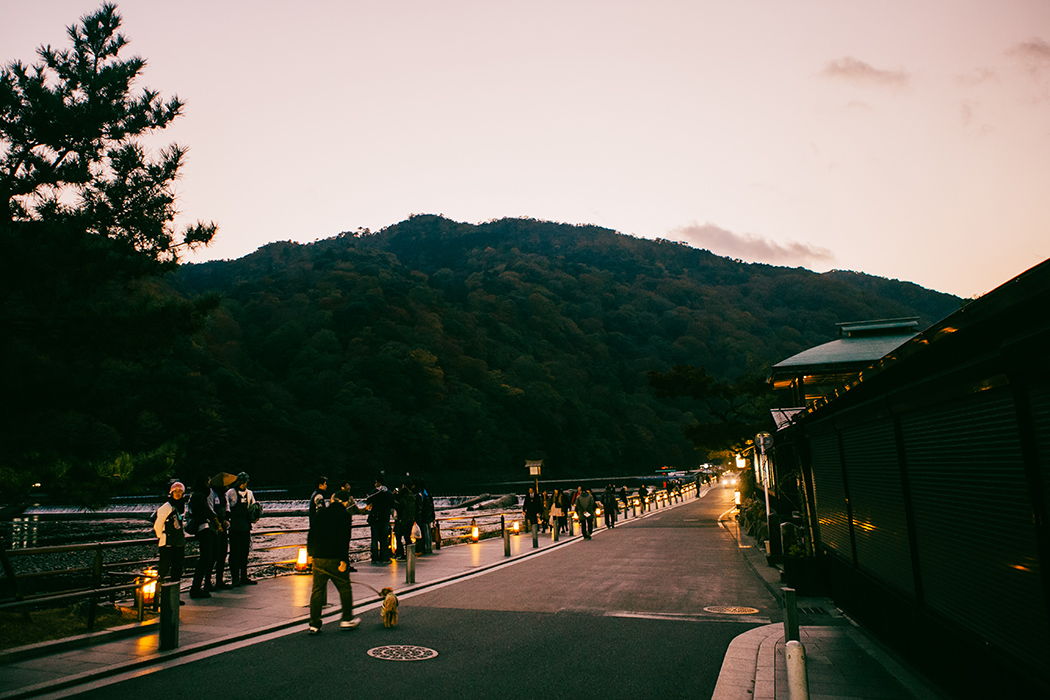 I know I missed my chance to take a photo of the mountain being covered in yellow, orange, and red leaves, but the view at dusk isn’t bad at all! 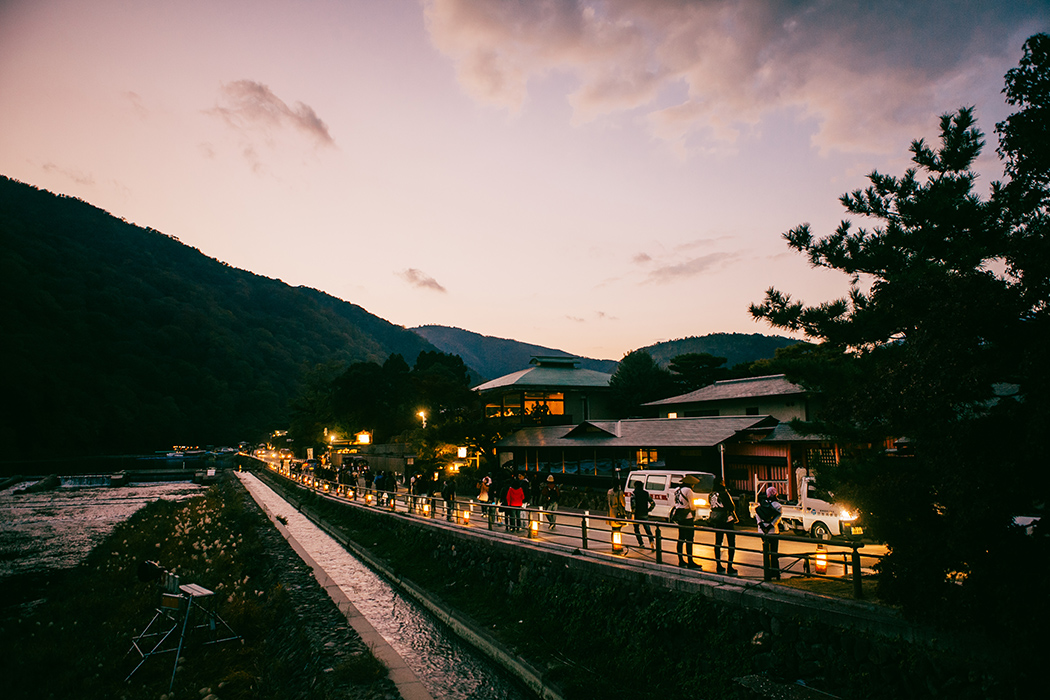 I think it’s just as glorious as the view in the morning. 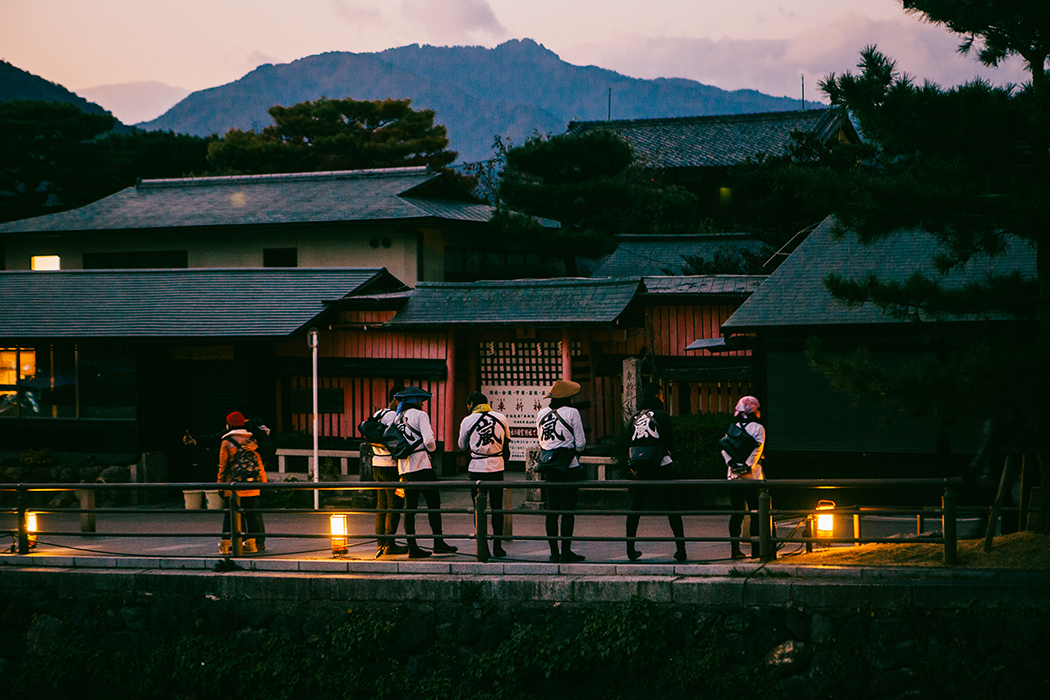 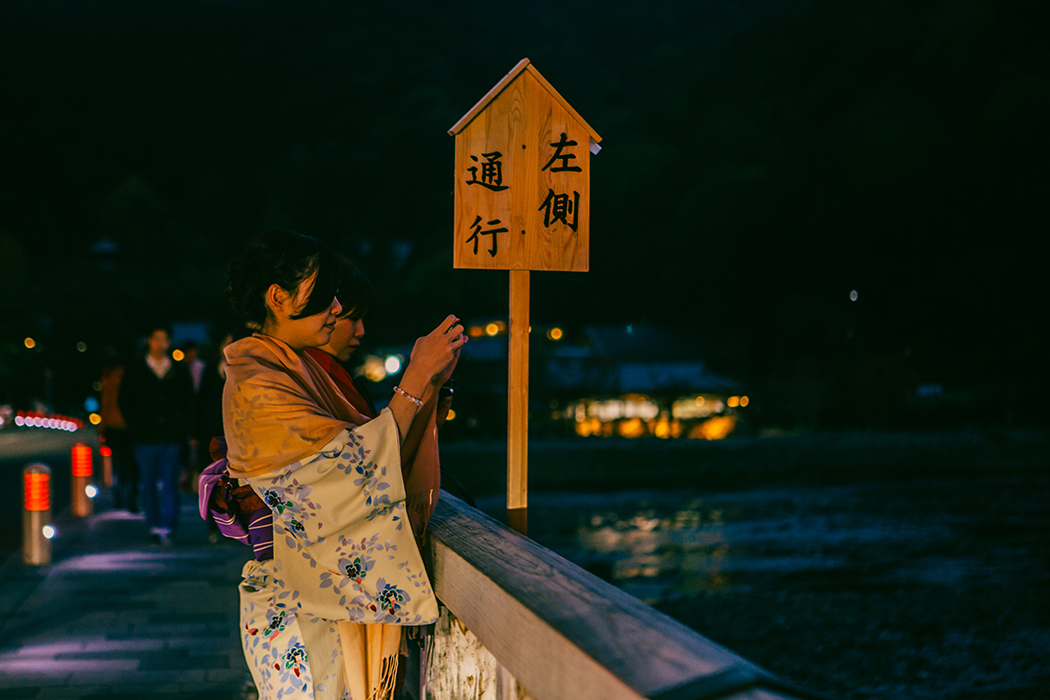 Last few minutes before the sun goes down. 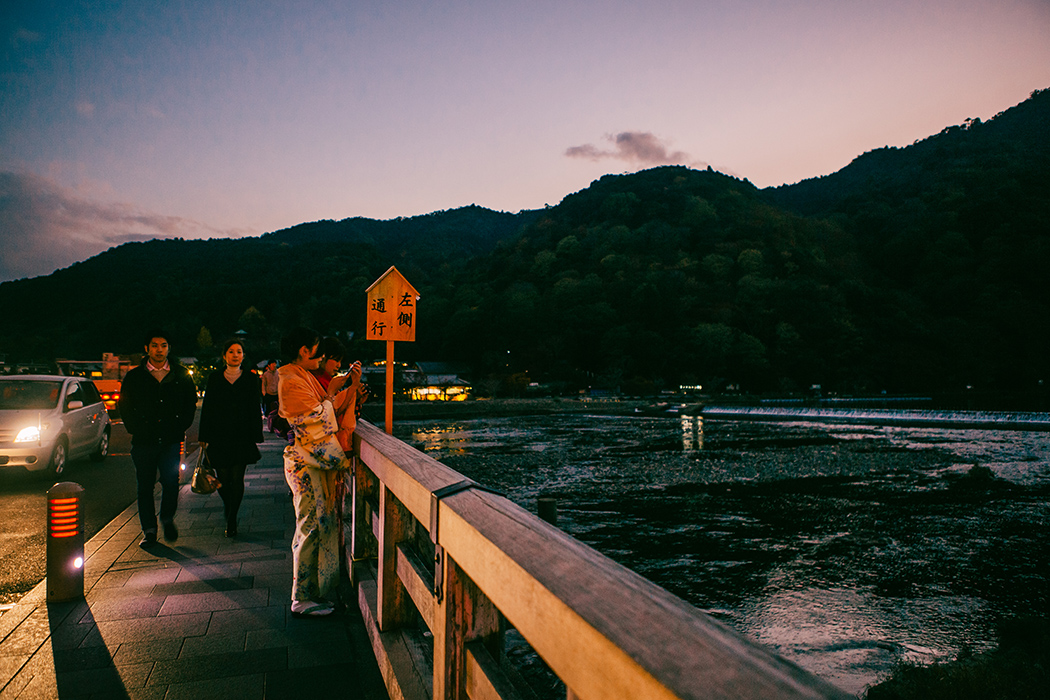 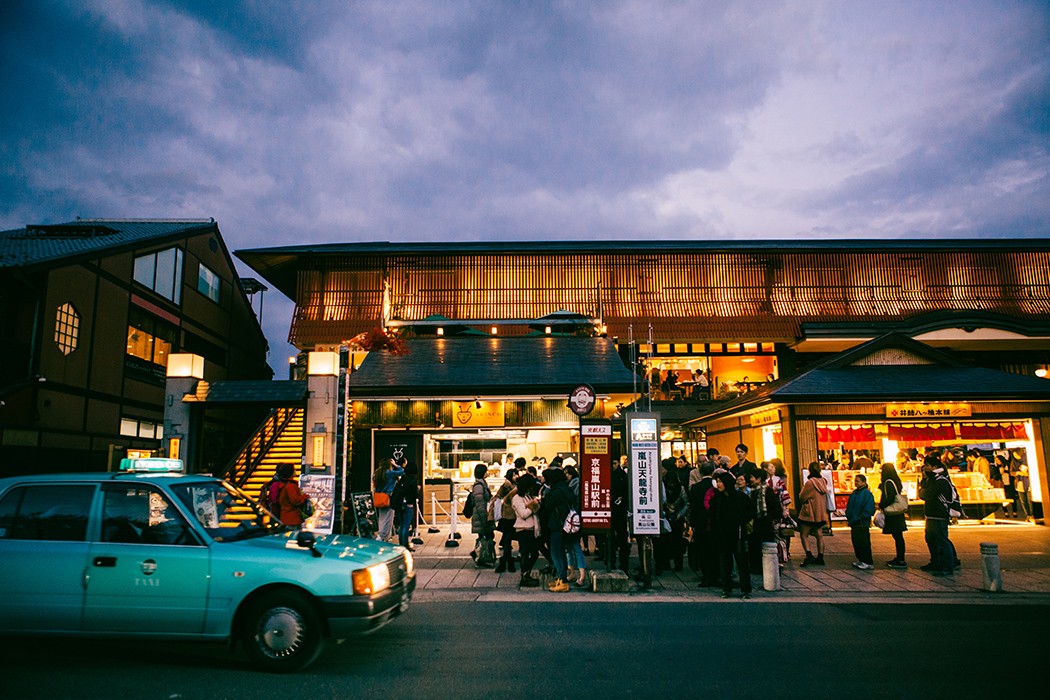 After the sun went down, I passed by Arashiyama Station where you can buy omiyage (お土産) before going home. It’s easy to find boxes of local sweets all over Japan, especially in train stations and airports. These are called omiyage, which are somewhat like souvenirs. Most of them even have amazing packaging – makes it all the more harder to throw them out after you’re done eating! 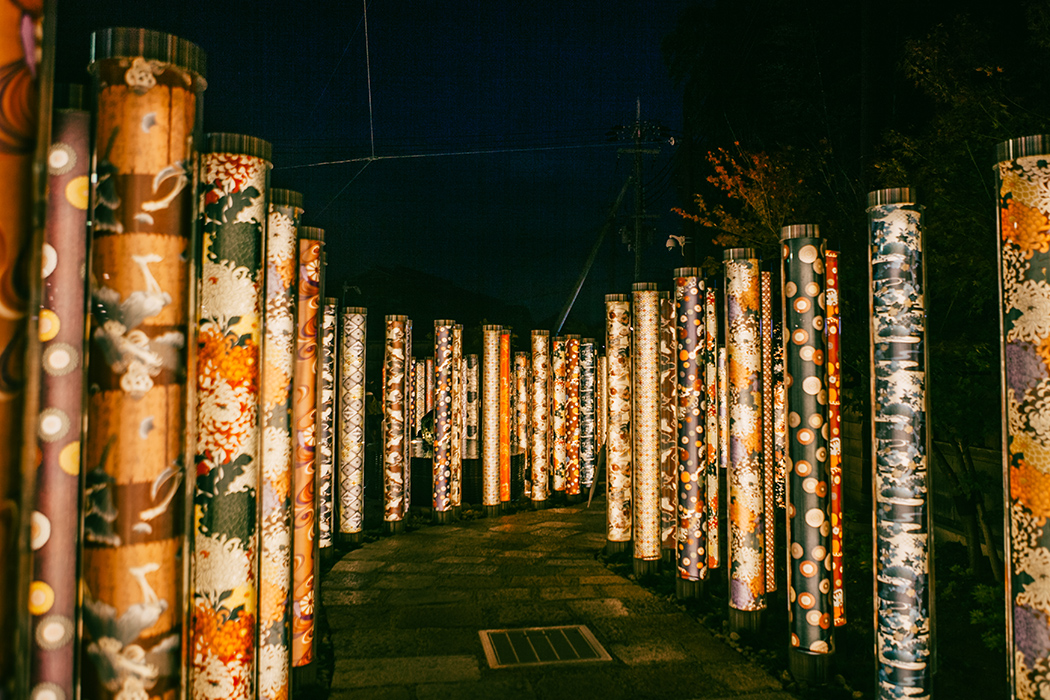 Just when I thought I was done with touring Arashiyama, I found myself in the middle of this beautiful kimono forest in Arashiyama Station. They put Yuzen cloth from Kyoto in acrylic, and lit them up with LEDs. You can find around 600 of these scattered all over the station, lighting up the common pathways where people pass through. 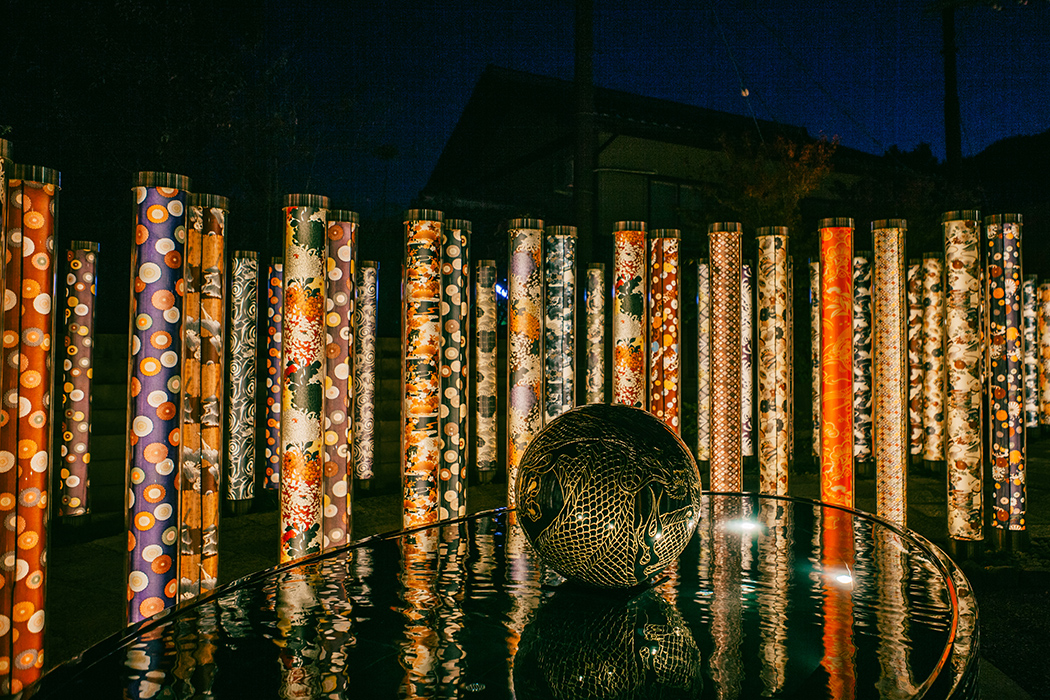 What a way to end a day in Arashiyama! 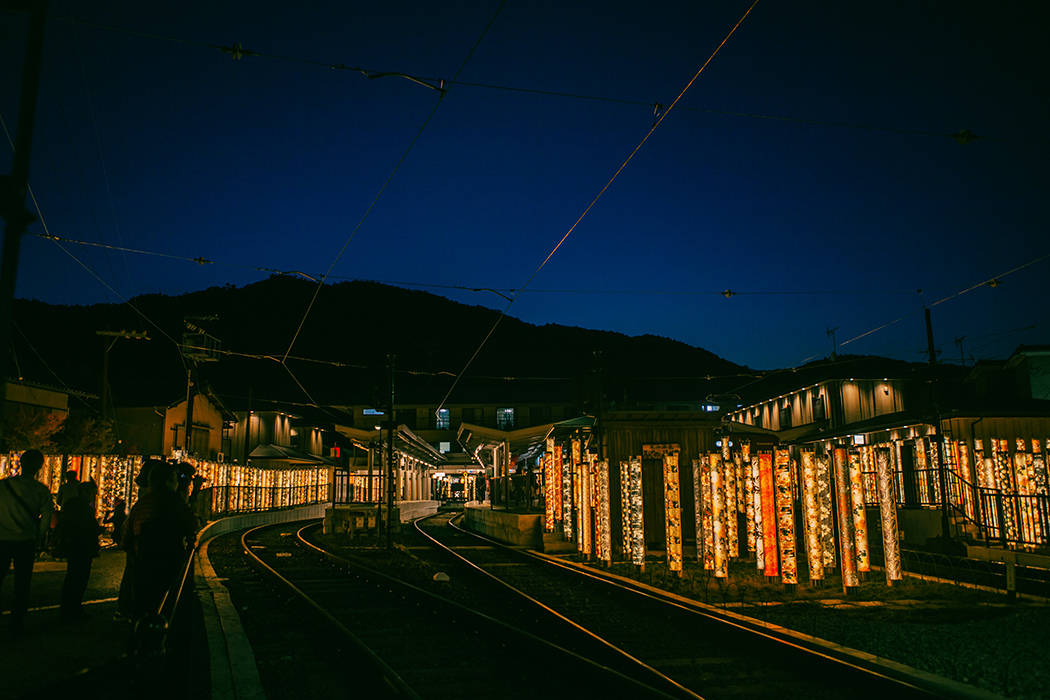 View from the end of the station. 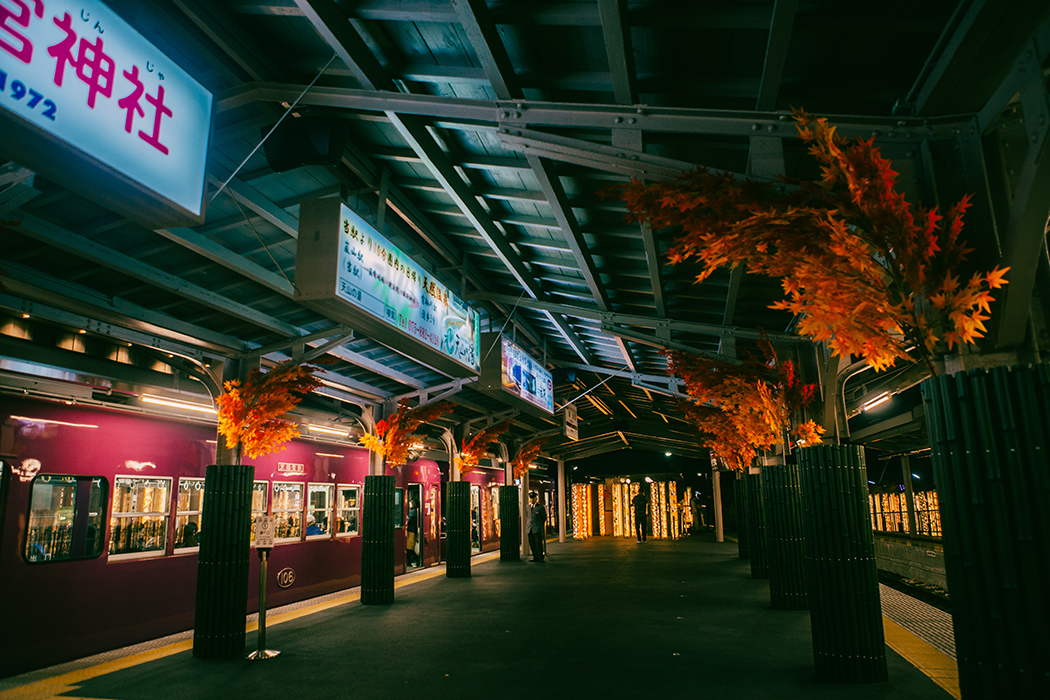 View from inside the station. 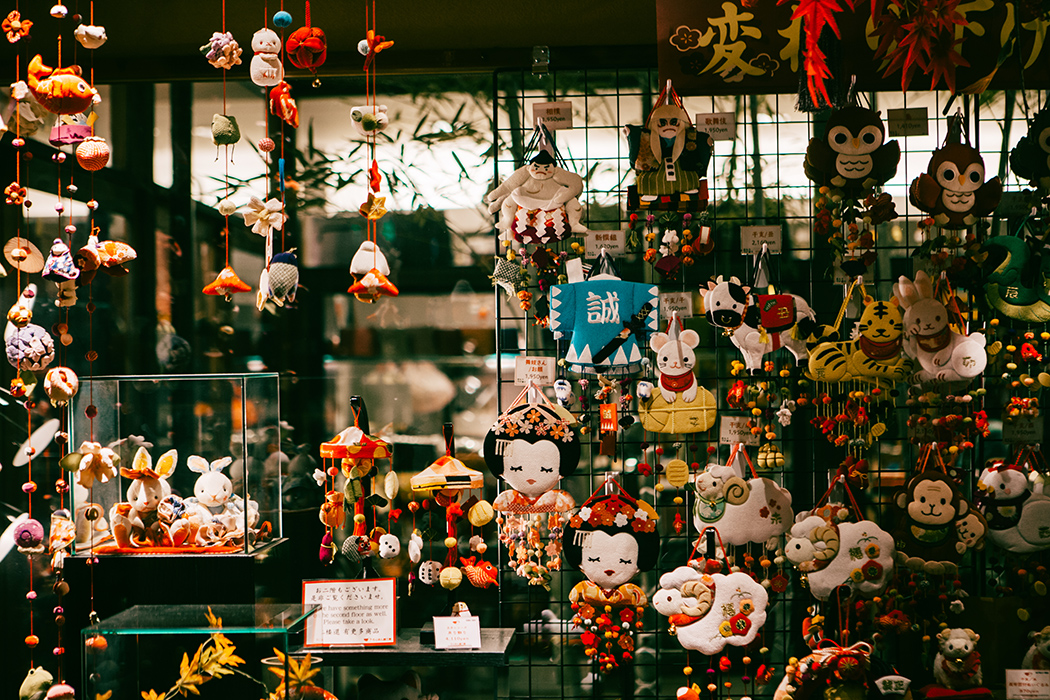 Before going back to JR Saga-Arashiyama Station (not to be confused with Arashiyama Station or the station with the kimono forest), I dropped by Arashiyama’s famous Chirimen Craft Museum (which is also a store). Chirimen is a traditional weaving technique that was developed in the late sixteenth century in Japan. 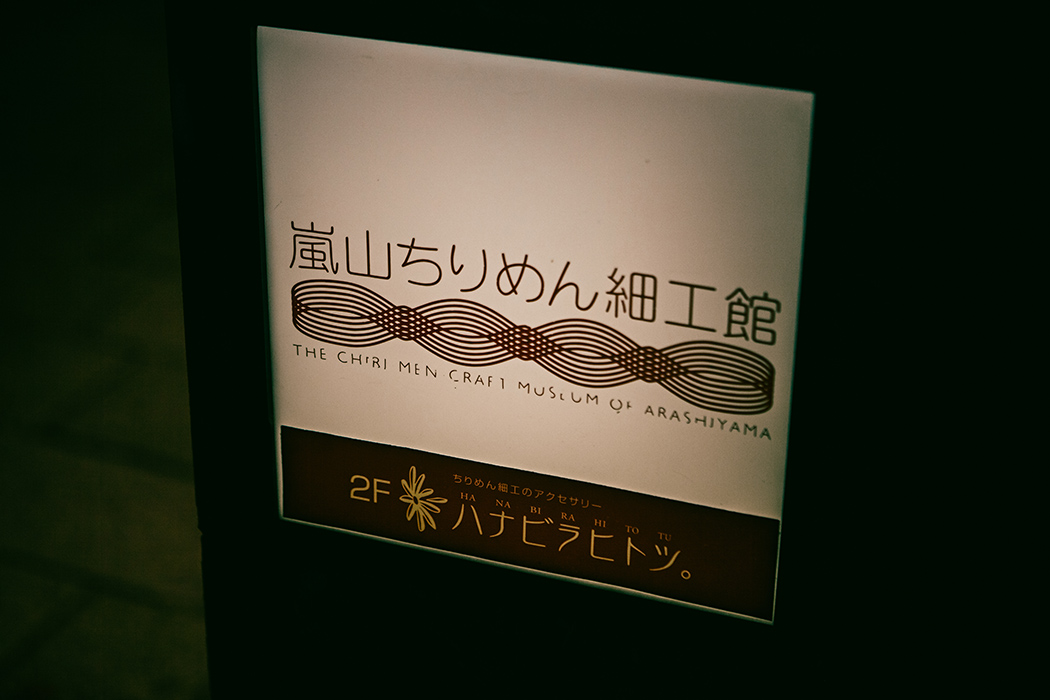 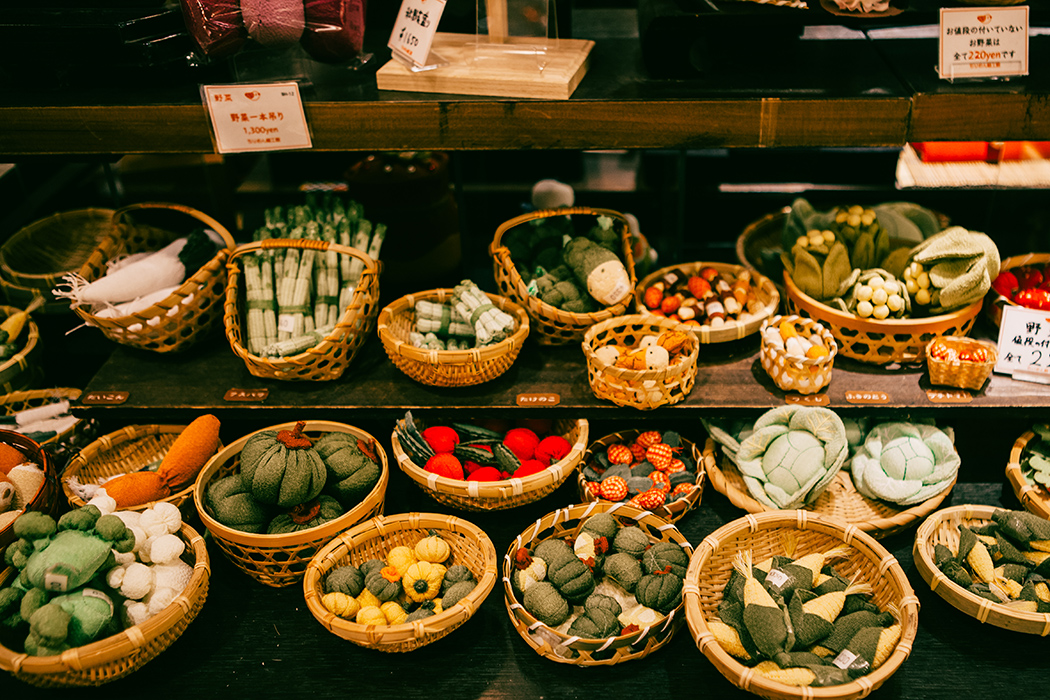 Nowadays, they use the technique to create dolls, purses, etc. Even fake veggies! 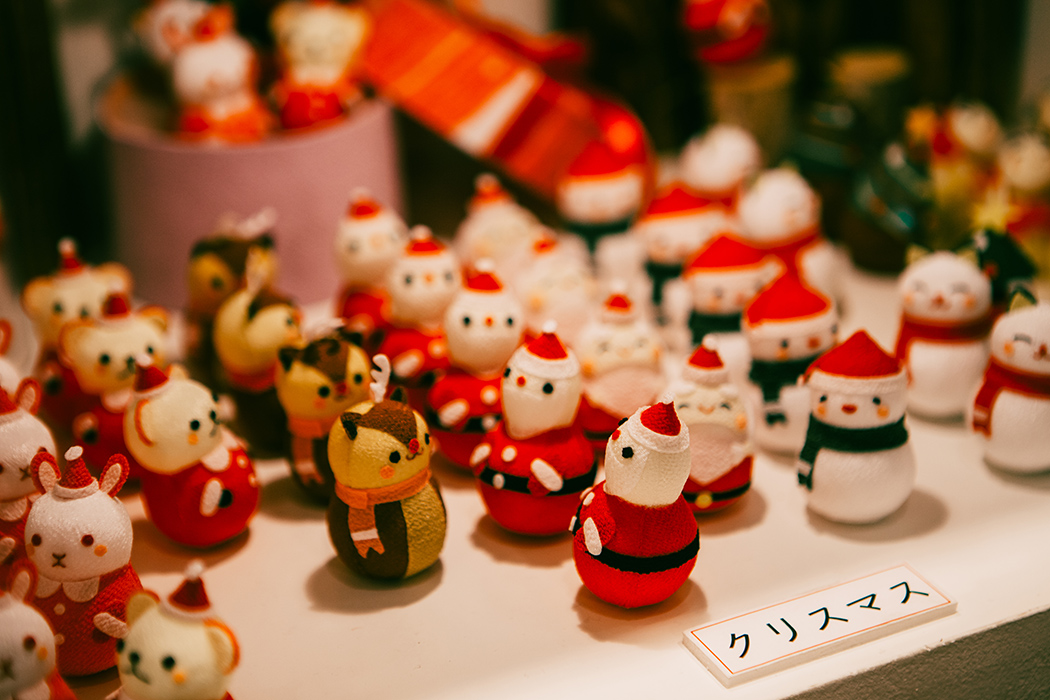 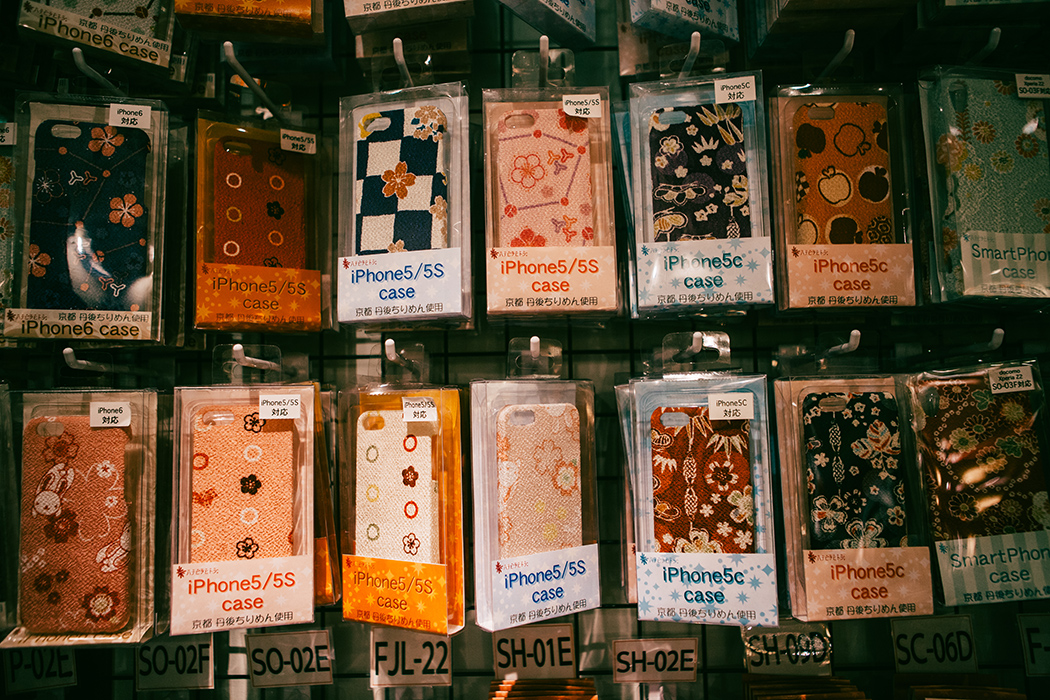 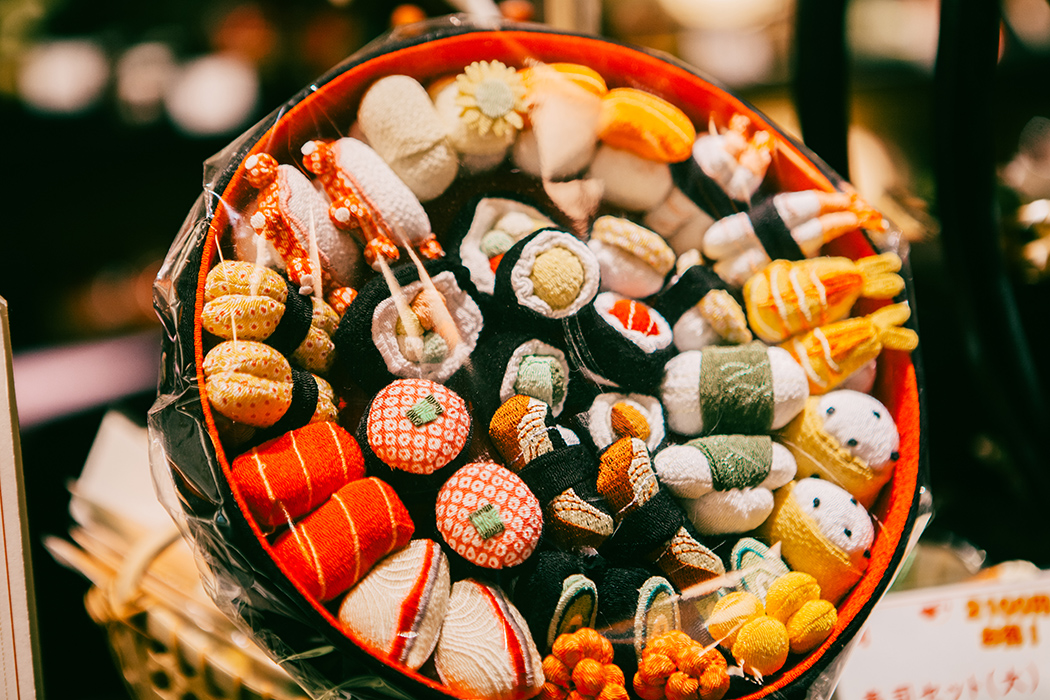 And last but not the least, sushi chirimen!

Sorry for the lack of updates recently! Stomach flu got the best of me these past few days – I was vomiting non-stop last Monday, and couldn’t bring myself to do anything yesterday. I’m feeling much better now though! Would like to chalk it up to my Wolverine-like healing abilities.